All races seem to sow the seeds of their own destruction. Destruction most vile, eating away at the very fiber of the moral core of the race and it's very existence. Though most of history has been lost, the races of the Styglek and a loose coalition of entities roughly referred to as “humanity” stand out. 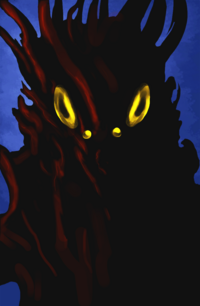 In the convoluted history of the menace knows as “Creeper”, the existence of the Loki was unknown until a lone Styglek attempted to save his race from assured destruction by providing vital clues to a group of human warriors who were attempting to turn back the tide of creeper engulfing the Galaxy. Little is remembered of the Styglek, since Thrade's quest was ultimately futile and his race succumbed to the onslaught of Creeper.

For millennia after the Styglek, the humans vainly attempted to stem the flow of Creeper through the universe. Ultimately they failed - largely because within the humans a faction more evil and vile than the Styglek arose. Many sources say that the leader of this faction was someone called “Quisling”, some historians disagree and point to an anonymous coalition that was lead by leaders only known by their pseudonyms - Stewbasic, stdout, Hubs, teknotiss, Xeos, and Thumbmaster. The only identifying object even tentatively linked to thee people is a very old image of uncertain provenance.

These humans were evil to the core. They corrupted Human weapons and defenses and adapted them for use by the Creeper as a tool to exterminate entire human worlds. They left colonies of human civilians and military to the creeper and actively abetted the Loki in their quest for universal destruction and entropy.

Little else is known. This has not diminished speculation as to what would motivate entities to take these actions. A current thesis holds that evolution gears entities to fiercely compete for supremacy in order to survive. Once the species is at or near the top of the food chain, the urge to compete becomes corrupted and is not used as a means to survival, but purely as a way of life. The entities then look for the most capable opponent and finds it not external, but within their own species and so starts to compete and threaten themselves. This is ironic, since ultimate success leads to ultimate destruction.