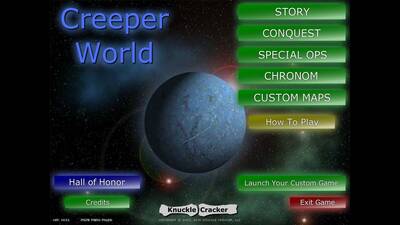 Creeper World is a Flash game with both real-time strategy and tower defense elements. Players must survive the onslaught of the titular blue mass which rises up the playing field and attempts to destroy their base of operations, Odin City. This is achieved by gathering energy and using it to power weapons which stave off the Creeper long enough for the player to link Odin City with each level's energy totems in order to escape to the next level.

Reviewers have stated that Creeper World has simplistic graphics, but praised the gameplay involving the Creeper. Two expansions were subsequently released:

Creeper World is a real-time strategy and tower defense game. Unlike most games of this type, there is only one enemy and it can only be repelled, not destroyed. The player must hold back a blue mass called the “Creeper”, which has already destroyed most of humanity and is now attacking Odin City, humanity's last bastion. This is done by placing towers onto the battlefield which shoot at the Creeper. The main goal of the game is to connect the player's base to energy totems through the use of energy collectors and relays, doing so opens a jump gate which allows Odin City to teleport to a new planet and attempt to escape the Creeper again.

Units to attack the Creeper are created in Odin City. In order to power their weapons, energy must be gathered by Collectors, which are placed by the player. These Collectors require space in order to harvest energy, and must be connected to the city's network, should a Collector become isolated by the Creeper it becomes inactive and must be joined to the rest of the network in order to continue providing energy. The game's landscapes have different elevations, the Creeper can quickly spread across low-lying areas but must gather before rising to higher ground. Here the player can create choke-points to try and prevent the spread. Units can attack the Creeper if they have line-of-sight contact, some units can also throw bombs into denser aspects of it in order to slow its spread.

There is more information in the old community wiki (now defunct). Transferring some of that information to this wiki would be appreciated. Creeper World 1 wiki on wikia

Want to know how it all fits together? Read the CW1 Story text!